Along with the Rotary Club of Trieste, the Northern Adriatic IYFR Fleet entered the 2019 ‘Around the Isle of Wight’ Regatta in the boat “IYFR Rotary Trieste Prosecco DOC”. This regatta of about 50 NM is extremely popular in Britain, having grown from just 25 participating sailors in 1931, to 1,750 in 2008. This makes this older event almost as popular as Trieste’s own ‘Barcolana’, founded in 1969, and with 2,698 entrants in 2018.

The Italian participation in the Isle of Wight Regatta originated from an IDE (International Disabled Exchange) project, when a trophy for the best boat with a crew of disabled sailors was presented by the IYFR Northern Adriatic Fleet at the Barcolana regatta in 2012. This was followed by a similar ‘Round the Island’ Isle of Wight trophy in 2016. In addition to the two trophies, the IDE project encourages the active participation of disabled sailors between these two locations.

The result has been an energetic collaboration between Cowes and Trieste. In 2018 a twinning was established between the Adriaco Yacht Club and the Royal London Yacht Club, the latter acting as a base for the Italian crews participating at Cowes. This was followed by another twinning in 2019, this time between the Società Velica Barcola Grignano and the Island Sailing Club, which was featured in a press conference held at the Italian Embassy in London in June. 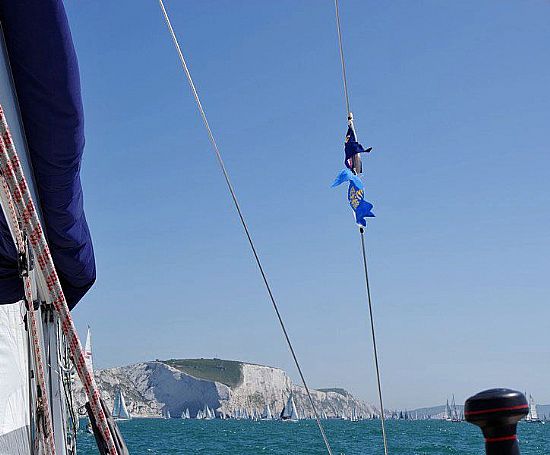 Over the years the friendship between British and Italian sailors participating in both the Barcolana and the Around the Isle of Wight events has grown. In Cowes, for example, a party offered by Prosecco DOC has become a traditional pre-race evening event, providing a unique opportunity to form new friendships and exchange knowledge.

In 2018 an Italian team at Cowes had the advantage of Selene, a very competitive boat. As a result two very competent disabled sailors, Kirsten Pollock and Davide Di Maria, were able to win the IYFR trophy. In 2019 Kirsten Pollock was joined by the Paralympic Fabrizio Sollazzo and four other members of Selene's crew, fresh from the ORC World Championship at Sibenik. Unfortunately the regatta suffered weak wind conditions with a long calm, and as a result two-thirds of the 1,200 participants did not cross the finish line within the prescribed time limit (22.30 after 14 hours of sailing). This was a big disappointment for the Italian crews, especially Prosecco DOC. However Selene’s crew was very enthusiastic about the double sailing experience of Trieste and the Solent.

Next year the objective is to find more competitive boats! To date Italian crews have used an Oceanis-37 and an Elan-434, the latter being more suited to cruising than racing, and consequently referred to as “The Truck” by its crew!